The Case for Mounting a TV Over the Fireplace

Newer mounts refute the traditional reasons to avoid placing the television over the mantel.

For the longest time, conventional wisdom has been to not mount your TV above a fireplace. As a professional installer, it’s likely you’ve heard all the reasons, but while valid at one time, those reasons no longer hold water. This is a critical point because placing a TV above a fireplace has always been — and remains — an extremely popular mounting option. When professional installers understand the reasons why TVs can be installed above a fireplace cost-effectively, efficiently, and safely, you open up a new world of options for your TV-buying customer.

The arguments against installing a TV above a fireplace or high on the wall boil down to four main categories: ergonomic, technical, fire, and aesthetics. Let’s take a look and see why they are no longer valid, thanks to the new generation of pulldown and swivel  mounts.

Sometimes, the space above the fireplace is the only spot in the room where a TV will fit; products like MantelMount makes those spots work.

The Ergonomic Argument: “It’s a Pain in the Neck”

This is probably the most frequently cited argument — and with good reason. If you’ve ever sat in the front row of a movie, you know the problem of watching a TV that is mounted too high on a wall. It requires you to crane your neck to see the screen, which can result in all kinds of health problems: neck and back pain, headaches, and eye strain, for starters. For those who try to avoid the sore-neck issue by using their eyes to look up instead of lifting their head, the problem of dry eyes comes into play as their eyes are forced to open wider. And the eye muscles get tired from working too hard as well.

Of course, you can slink down into the chair so you’re not bending your neck quite as much, but this unnatural posture is going to cause its own health issues. Not to mention angering your mother, who spent all those years yelling at you to stand up straight.

The ergonomic issue was comically driven home in a House Beautiful article: “The biggest reason I fall into the ‘anti-television-over-mantel’ camp is because it places the screen at an uncomfortable angle for viewing. You sit on the couch, looking very much like a crash test dummy in the second before an impact. That is no way to live.”

It’s universally agreed that optimal viewing, no matter the size of your screen, is straight on at eye level, both for ergonomic reasons as well as creating the most enjoyable TV-viewing experience. Pulldown and swivel mounts can accomplish both objectives. By being able to lower your flatscreen TV from above a mantel (or high on a wall) to eye level, you can create an ergonomically comfortable viewing position while optimizing viewing angle (more on that in a second). Plus, once your viewing is over, you can send the TV back to its original position.

There is a wide spectrum of mount types with varying features that may or may not suit you, so remember to do your homework. But of prime importance are mounts that give you the most vertical distance to get as close to eye-level viewing as possible, as well as swivel capability so that your TV doesn’t hit or damage your mantel. 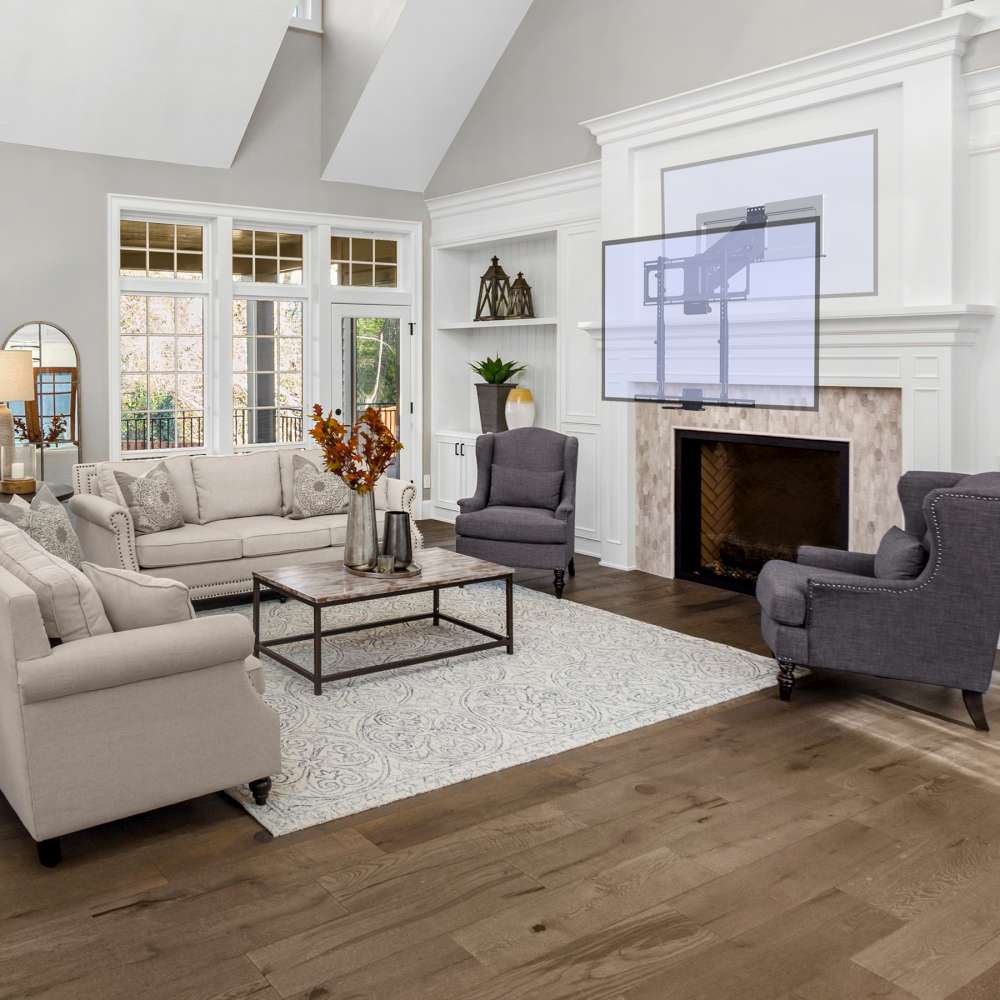 The Technical Argument: Looking for the “Sweet Spot”

Video experts agree that in addition to the health problems, there is the quality of the picture to consider. As stated on Build.com, “The impact [that] angle has on your TV picture will depend on the type of HDTV you are running. Image quality can be affected by both horizontal viewing angle (i.e., viewing the TV from either side), or vertical viewing angle (e.g., if your TV’s mounted too high or low).” The article also states that while newer video technologies have lessened the impact of viewing angle on picture quality, they have by no means eliminated it.

Consequently, if the viewer is not looking straight at the screen (and if the TV is mounted above a fireplace, they are not), the result can still be a washed-out image.  Digital Trends notes that an LCD screen (which you find on LED TVs) is made up of many tiny, shuttered windows. These windows open and close to let the TV’s backlight through, thus creating an image. However, these windows have a minimum viewing angle; to be more specific, the screen has a sweet spot “cone” that shoots over the viewer’s head if the TV is too high, so the colors are not as vibrant when viewing off to the side (it’s even worse from below or above).

Again, a pulldown and swivel mount will alleviate this issue by bringing the TV to a level where the viewer is watching it straight on. Resolution and color clarity are greatly enhanced. 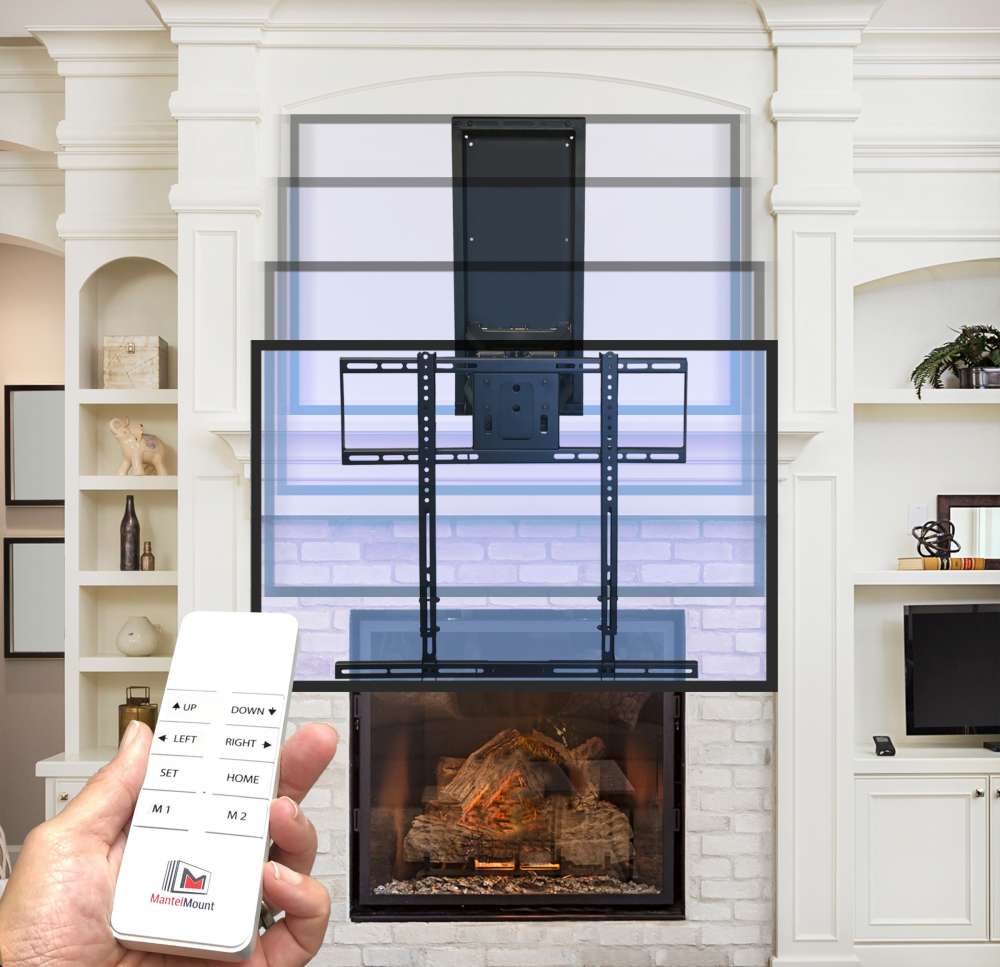 The Aesthetic Argument: The Center of Attention?

Many interior designers consider mounting a TV above the fireplace to be a major decorating faux pas. The primary reason mentioned is that the TV shouldn’t be the visual focus of the room. Those in the know often claim, somewhat condescendingly, that the TV should be relegated to a separate room and not in the primary living area, which should be a “sanctum of conversation, introspection, and lively social intercourse.”

Some have gone so far as to insult the poor TV. From House Beautiful: “Think of some of your favorite homes you’ve been in — ones where the decor really inspires you…and then, no doubt, they have the better part of an entire wall dedicated to…a large, shiny, glaringly unattractive black rectangle. Yes, the TV.” Wow, tell us what you really think.

Yet some of the most authoritative interior design voices disagree. An article in Better Homes and Gardens states, “Hanging a flat screen above a mantel or on a brick fireplace’s face results in a dual-purpose entertainment center that becomes a room’s visual centerpiece.”

What’s more, today’s flatscreen TVs are thinner, sleeker, and more visually striking than ever; they’re virtual works of art even when turned off. Consequently, there are many consumers who want to highlight these attractive electronic devices, not downplay them. And since they are so often mounted in the living room, consumers have grown accustomed to their presence — sometimes, they will express a note of envy at seeing the newest, biggest 8K OLED hanging like electronic royalty above a neighbor’s mantel.

And keep in mind that the space above the fireplace may very well be the only viable spot to mount your TV, depending on your home’s layout. Open floor plans have cut out entire walls, while built-in shelves and light sconces have frequently rendered alternative mounting locations moot.

Ultimately, it’s a matter of preference. There are those consumers who would prefer a TV-free living room. Conversely, some of us enjoy highlighting what we perceive to be an eye-catching, technological marvel. And still others have limited options of where their TV can reside. But for those who decide — out of necessity or choice — that an above-fireplace living room TV is the way to go, the pulldown and swivel mount is a must-have device.

The Heat Argument: Play It Cool

According to some electronics experts, having an open fire going while your TV is above the mantel can potentially damage sensitive electronic parts. There is actually considerable disagreement over this issue; even those who agree can’t necessarily concur on what temperature is considered too high and how long a TV must be exposed to it before damage occurs.

The fact is, a mantel will protect your TV from a great deal of heat emanating from an active fireplace. But even so, there is still the soot to consider, which can certainly damage sensitive electronic parts.

Even though our MantelMount units (like the one John Sciacca reviewed) feature heat sensing handles that turn red well before the temperature reaches a level where it can cause damage (our motorized smart mount will even retract automatically when temperature gets too high), there is a simple solution: watch TV or have a fire, but don’t have both. We included heat-protection features to help consumers avoid damage if they insist on having a fire going while they’re watching their favorite show, but the best course of action is still to do one or the other. If you have a fire going, the TV mounted above the fireplace should be well out of range of both heat and soot. And if you’re watching TV with the mount pulled down, chances are good that the heat is being partially blocked anyway.

The Final Decision: There’s No Right or Wrong

As we’ve seen, all of the reasons not to hang a TV above the fireplace can be negated by technology (i.e., the use of pulldown and swivel mounts), personal preference (if you like it, do it), or necessity (it’s the only spot). The insistence that it should be avoided at all costs is shortsighted and, to a large extent, doesn’t take into account the development of movable mounts, which dispel the myth that TVs shouldn’t be installed above fireplaces. The bottom line is, there is simply no reason to summarily rule it out as an option. That’s yesterday’s news.

Michael Smith is the Vice President of Wholesale Operations for MantelMount, the premier pulldown and swivel mount for flatscreen TVs.

See more of the WE LOVE FIRE Gallery of Ideas