Yield: Serves 8 to 10, with leftovers

Fuel: Oak, apple, mesquite, and hickory are traditionally associated with brisket—enough for at least 8 hours of smoking (see chart on page 6).

Shop: Buy a brisket flat (the flat bottom muscle—see page 68) with a generous layer of fat on top.

WHAT ELSE: As you smoke a brisket, the temperature will steadily rise, then plateau around 160°F (and in some instances, actually drop a few degrees) for an hour or so—sometimes more. This is called the stall and it results from the evaporation of the moisture from the surface of the brisket. (You may even see a puddle of liquid gather on the top.) This evaporation cools the meat much the way sweat helps cool you off in hot weather. Be patient—the stall will stop and the temperature will start climbing again.

If there’s one dish that epitomizes barbecue, that every aspiring smoke master hopes to perfect, it’s brisket. If there’s one dish that intimidates—even if you’ve long since reached your comfort zone with smoking pork shoulders and ribs—it’s brisket. The challenge is the tough connective tissue, not to mention a muscle structure in a whole brisket that has the grain going in two separate directions. I’m going to tell you how to smoke a perfect brisket every time—and that’s whether you start with the whole 18-pound packer brisket; with the 6- to 8-pound brisket flat you find at your local butcher shop; or the trimmed (make that scalped) 3- to 5-pound center-cut brisket often sold at the supermarket. Up first: the brisket flat. 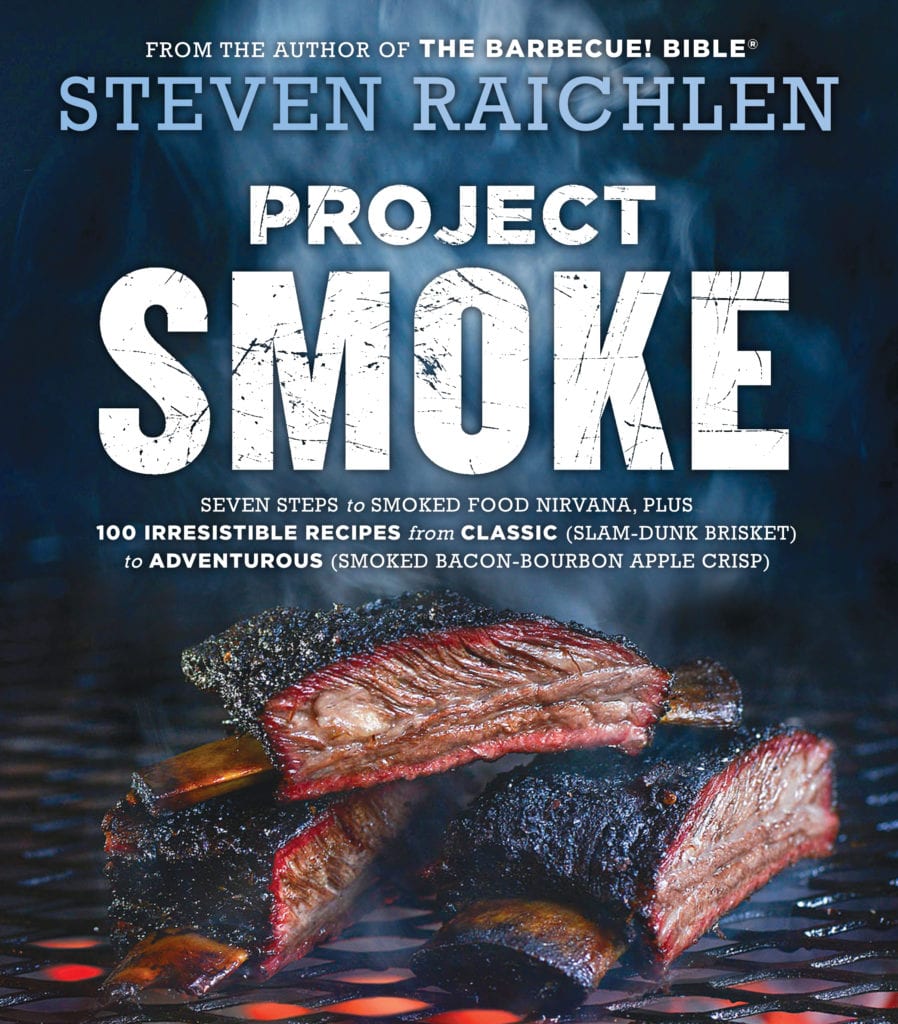 Smoking a full packer brisket: A whole brisket—sometimes called a packer brisket—weighs 14 to 18 pounds and includes the lean flat (also referred to as first-cut brisket) that terminates in a triangular point, and a fatty muscle on top called the point or the deckle.

Trim the brisket leaving a 1/2-inch-thick cap of fat on top. There’s a hard ball of fat between the deckle and the flat on one side of the brisket: Cut out as much as possible without separating the two. Brush the brisket with equal parts mustard and pickle juice, if desired, then season with salt and pepper as described on page 67.

Smoke the brisket until the internal temperature reaches 175°F, 10 to 14 hours. Tightly wrap the brisket in butcher paper and continue smoking until the internal temperature reaches 200°F and the meat is tender enough to pierce with a gloved finger or wooden spoon handle—another 2 to 4 hours, a total of 12 to 18 hours, depending on the size of the brisket. Let the wrapped brisket rest in the cooler for 1½ to 2 hours before slicing (see sidebar).

Smoking a small, lean center-cut brisket flat: Perhaps the only brisket your supermarket sells is a center-cut section of the flat weighing 3 to 5 pounds, from which some misguided butcher has trimmed off all the fat.
(It happens.) Don’t despair: You can turn it into a respectable smoked brisket, too. Season it as described on page 66 and place it in a disposable aluminum foil pan, covering the top with strips of bacon. Smoke as described on page 66. After 4½ hours, cover the pan with aluminum foil, crimping it to the edges, poke small holes in the top to release the steam, and return it to the smoker. The total cooking time will be 6 to 7 hours. There is no need to wrap the brisket in butcher paper, but you should rest it in a cooler for 1 hour before carving and serving. (There won’t be much flavor left in the bacon—discard it.)