It registers about a 9.5 on the Frustration Meter when you try to get a fire going and the fireplace won’t draft.  Smoke backs up into the room and smells up the house.  Do you open up doors and windows to air out the house and try again?  Or, do you grab another blanket and forget about the flames?

There are a few reasons why a draft may be difficult to establish in your wood burning fireplace or stove.  Our hope is this article will provide some insight and relieve that frustration.

The air in your house is always moving.  It may be subtle and you might not even notice it, but air is constantly trying to get into the house, or leak out of it.  Generally speaking, airflow in the upper levels of the house is trying to get out and in the lower portions of your home, tries to get in.  As warm air rises in the house, it’s forced out through tiny openings in the building’s envelope.  This air infiltration occurs around windows and doors, outlets, switches and light fixtures, vents, pipes, etc.

So, what’s this got to do with my fireplace?  Understand that a chimney works on negative air pressure.  Adequate combustion air is needed when you build a fire in your fireplace.  If there’s not enough, smoke will not be pulled up the chimney.  The higher up a chimney goes, the more negative the air pressure.  We all know that warm air rises.  The heat that is generated from the fire is actually pulled through the firebox and up the chimney because of the difference in air pressure.  This moving air and pulling effect is called “draft”.

THE NEED FOR COMBUSTION AIR!

A fire needs air to ignite and burn.  There can be several obstacles that can prevent a fire from drafting properly.

First, make sure the chimney is cleaned and inspected regularly.  Code says, at least once a year.  A clogged or dirty chimney or one in deteriorating condition can restrict the airflow up the chimney.  [Link to:  Who Cleans Chimneys?]  Have a certified professional evaluate your chimney annually.

Some chimneys are problematic because of their height.  Most inserts, stoves and fireplaces will perform best with a chimney height between 12’ and 30’.  Too short, not enough draft.  Too tall, too much draft.

The chimney location is critical, too.  If possible, install the chimney straight up through the house, where it will stay warmer.  Try to avoid an installation on or through an exterior wall, especially on the north and west sides of the house.  Remember, if the chimney is cold, the draft will be more difficult to establish.  Heavier, colder air, falling in the chimney can be hard to overcome when getting a fire started.  Exterior chimney systems can be fussy, especially in freezing conditions. An extremely tall, exterior chimney is never a good idea. 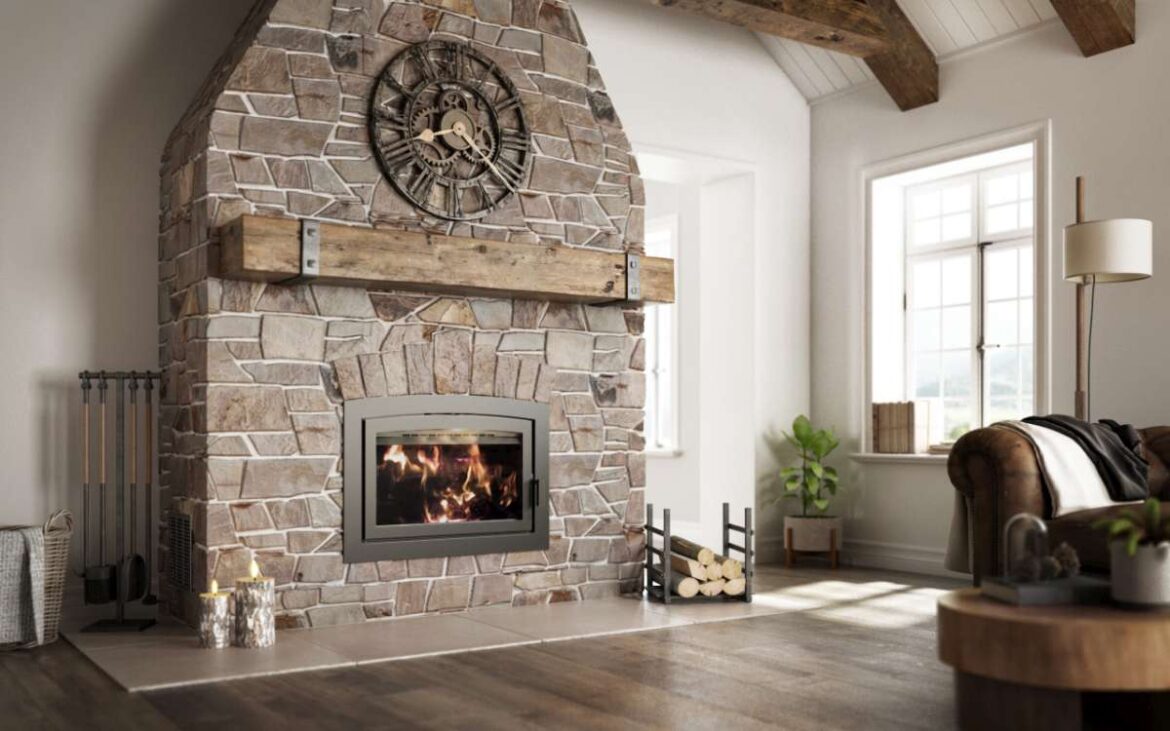 It should go without saying, but we’ll mention it anyway:  make sure the damper is fully open on the fireplace.  It’s not a good idea to try and control the air flow through a fireplace by partially closing the damper.  Always keep it wide open.

Another frequent cause of poor draft is using damp or oversized wood.  Always use small, dry kindling and a few wads of newspapers from a cold start.  Add slightly larger pieces of dry kindling until a coal bed starts to form.  See Fireplace, How To Light It. There are a few different techniques explained in the link that will help you get a quick and effective fire going in your appliance.  Dry and small kindling is the key for getting a fire going.  DRY is always the operative word when it comes to burning wood.

Another possibility of a poor draft in your fireplace, stove or insert is negative air pressure.  We alluded to this earlier, but let’s discuss it a bit further.  When a home tries to pull air inside, instead of forcing it outside around windows, doors, outlets, etc. the result is negative air pressure.  This normally occurs in the lower levels of very tightly sealed homes.  There isn’t an easy way for replacement air to re-enter the dwelling.

In our article, What Is Negative Air Pressure?, we’ve stated that “in serious situations, negative air pressure can actually out-muscle the draft in a chimney and sucks that “make-up” air down the chimney.  Needless to say, the problem with this, is the difficulty of getting a fire established in your fireplace, stove or insert and the smoke filling the house!  With any volume of outside air being pulled down your chimney, it will be difficult to get any sort of draft established.”

There are many constantly changing factors that can contribute to negative air pressure in a house.  Bathroom exhaust fans, kitchen hoods, water heaters, and other mechanical and heating systems will influence the airflow in a home.  Fortunately, there’s an easy test that can be done to see if negative air pressure in your home is an issue with your fireplace or stove.  While the chimney and fireplace are cold, attempt to get a fire burning with a little kindling and a few wads of newspaper.  If you notice the smoke is backing up into the room, simply open a window or door several inches and see what effect it has on the fire and draft.  By opening a window or door, you should be supplying plenty of make-up air to the house and the smoke should be easily pulled up the chimney.

Remedies for negative air pressure can be a mechanical air make-up system.  These can be installed by an HVAC contractor.  Furthermore, many wood burning fireplaces and stoves have optional outside air kits that deliver combustion air directly into the firebox. 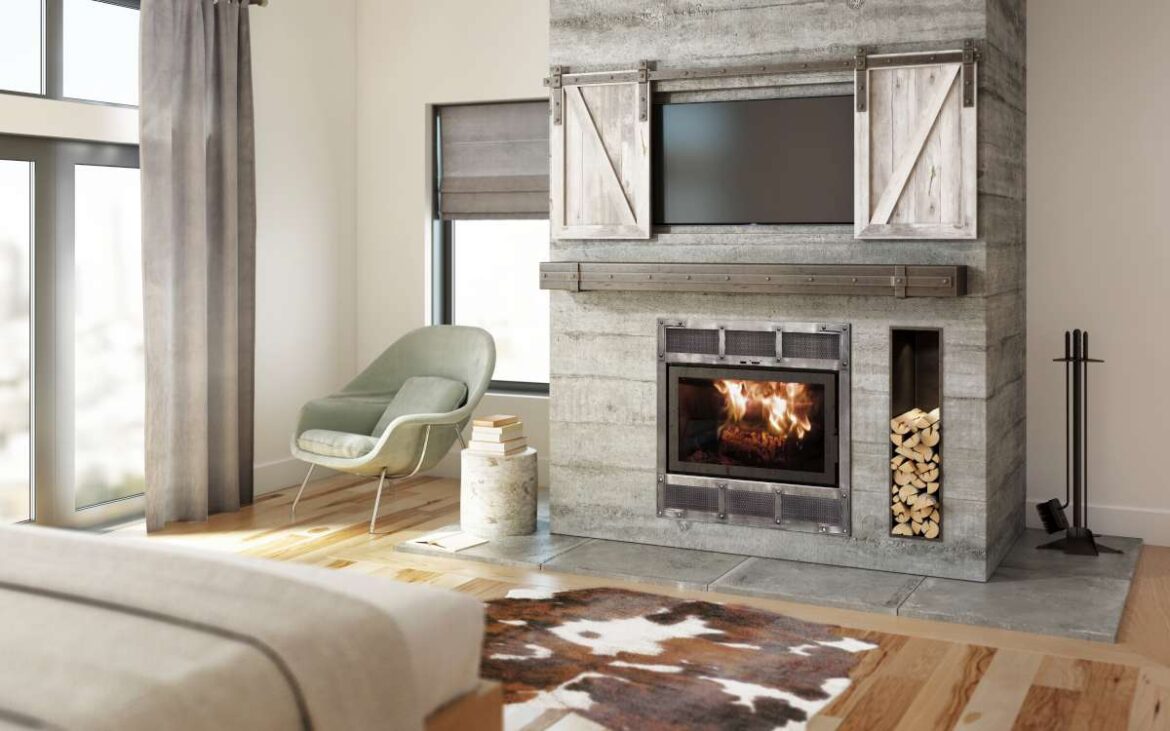 Another possibility of a fireplace, stove or insert not drafting properly is strong wind gusts.  Occasionally, a high wind from a certain direction can cause a downdraft.  There are some pivoting, wind directional chimney caps designed for windy locations that could be helpful.

Additionally, an improperly sized chimney will also lead to a poor draft and smoke backing up into the house.  It’s always best to match the size of the chimney to the flue collar on a stove or fireplace insert.  For zero clearance wood burning fireplaces, usually a certain brand of chimney pipe will be specified by the manufacturer in the owner’s manual.

Your WE LOVE FIRE dealer has national certified experts on staff to evaluate and assist with the scenarios described here.  We’re only a phone call or email away!

Joseph G. Bodden is a Wisconsin native and is semi-retired after 40+ years in marketing, sales and technical customer service work. Over 23 of those years have been in the fireplace industry, as the Hearth Division Manager in an organization that operates two retail shops. During that time, Bodden was certified by the National Fireplace Institute in wood & gas technologies. He was also selected several times by Hearth & Home magazine as a judge for the annual VESTA awards that recognize manufacturers creativity and innovation in product design and technology. One thing that Joe particularly finds fulfilling is explaining fairly complex subjects to fireplace customers and steering them to specific products that will satisfy their objectives. There’s nothing like unsolicited positive feedback from a happy customer! He enjoys the outdoors, playing guitar and spending time with their five grandchildren. Bodden continues to live in north central Wisconsin with his bride of 45 years.